skip to main | skip to sidebar

I think the number of posts I've made this year makes this statement VERY CLEAR.  I don't need to tell you, dear five people that still torture yourselves by coming here.  I love you, but you do know that this has turned into some co-dependent relationship, right?  Or something like that.  I'm no expert on that kind of stuff.  I do know you are some loyal ass blog readers and I give you props for giving me the very little encouragement I apparently need to spout off about a bunch of bullshit.

So, I'm going to wrap up this nonsense that started in November of 2005.  At least for now.  I may come back to this blog when I'm feeling more like a pineapple reporter.  It does seem a little wrong to walk away after all this time, but it is time for something new.

Don't get me wrong.  I love sushi.  I also love food trailers.  Give me cupcakes, pizza or tacos out of a food trailer any day.  But there is just something wrong about eating sushi made in a food trailer on the side of the road.  Maybe it is just me, but I'll have to pass. 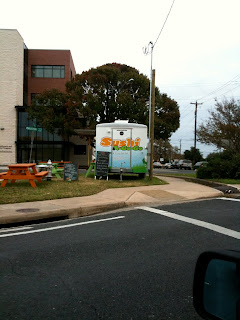 *As always, you can click the photo to make it more bigger!
reported by pineapple at 8:00 AM 4 comments:

it is with a not so heavy heart and a jammed pinky finger,

I am saying goodbye to the styrofoam rock.  You may recall that in July a certain someone moved out without taking this gigantically stupid, phallic piece of shit.*  Well, bulk trash day has finally arrived.  Come Monday this albatross will be going to its next home: the landfill.

Just for the record, styrofoam rocks are a lot heavier than you think.  I had to turn it end over end because it was too heavy to pick up and carry to the curb.  Unfortunately, the sorry ass thing broke and I jammed my finger.  Please note the unfortunate thing is that I hurt my hand, not that the stupid thing broke.  I just want to be clear about that.  While I was cussing up a storm, Laverne came to check out the commotion and to pay her respects to the monstrosity. 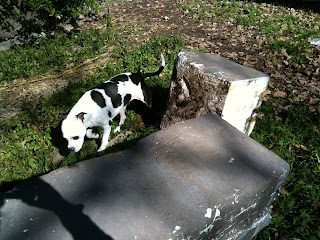 While I feel bad that the dogs can't play "Queen of the Mountain" anymore, I'm glad that remnant of my past is leaving my now happy home.  Now it is sitting on my curb and the people prowling for curbside treasure keep slowing down to look.  I don't know why they don't want to take it with them (said with much sarcasm). 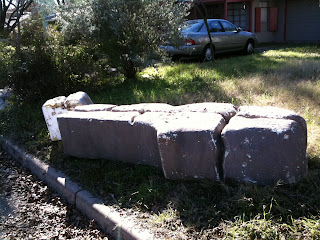 *Ironically, last night I ran into my friend that a certain someone claimed asked him to bring home the monstrosity so he could pick it up later from our house.  I told him that Sunday was his last chance to claim this "prize".  However, his wife was in earshot and told him that he wasn't allowed to bring it home.  He tried to convince her why it would be a good thing to have, she did not change her mind.  I can't say that I blame her one bit.

I've spent the past week of my life in utter turmoil.  Mostly because everything in my house has placed in stacks in the middle of my rooms.  I haven't been able to really cook or clean or do laundry this whole time because the entire inside of my house was being painted.  Every morning I took the dogs to my parents house and then picked them up after work.  How you people with kids don't just die of exhaustion, I'll never know.  The painters basically finished today and I like that my walls aren't all nasty and dingy.  The rest of my house is all nasty and dingy because I've had painters in it for a week, but the walls aren't all nasty and dingy any more.  I guess I have a lot of house cleaning in my future.  But I was really bummed out when I discovered that they splattered paint all over my shower curtain, tub, sink, and my fantastic 1950s bathroom tile.  Then I discovered that most of my blinds have been booby trapped because they fall off on my head when I try to adjust them.  It is after 11:00 pm and there is still a huge stack of stuff on my bed.  I'm exhausted and I need to go to bed.  I'm thinking about crying, but I'm just too fucking tired.  Also?  It turns out the color I picked for the bedroom looks like shit with my carpet.  Yay, me!

reported by pineapple at 7:44 PM 3 comments:

All month Laverne has devoted herself to my nanowrimo project.  She has tirelessly slept on my feet or with her head next to my lap anytime I sat down to write.  But Shirley was feeling really left out and upped the game last night.  For a while she was too helpful (you just can't write with a 60 pound dog sitting on you like you're a lazy boy recliner), but she finally took her helpfulness down a notch and curled up on my legs.  Once I got out from underneath her, I was still trapped on the couch so I put a pillow on the dog and set my laptop on top.  Laverne then took her cue to crash out on my feet.  It wasn't the most comfortable thing, but I managed about 1500 words written like this until she started peaking her head from under the pillow.  That is when I took this picture: 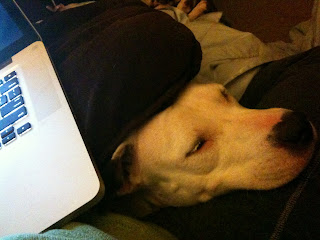 reported by pineapple at 1:48 PM 3 comments:

I haven't posted anything on my blog all month because I have been super busy devising new projects to undertake this month (such as furniture painting, working in the yard, cleaning my house, volunteering to be waterboarded).  Er, I mean, that I'm writing a book in one month.  Anyway, I decided in an attempt to procrastinate, I mean update you on my status, I'm posting this word count widget.  Enjoy!